or make 4 interest-free payments of $24.99 AUD fortnightly with

The Mega Comfy cat litter box is 'mega' in more ways than one. It includes an extra deep tray to reduce litter scattering on the floor, four solid latching locks to keep the hood securely attached to the tray and a hidden storage unit with bin liners, scoop and charcoal filter to help reduce odours.

This is a very good kitty litter. Quite well constructed and affords privacy for our kitten when she attends to business. She still manages however, to stand on the outside of the box, lean in by standing on her hind legs and scape the litter out of box with her front paws and onto the floor which is a little disappointing.

Got this for our cat who is quite a long and big one and it works perfectly for him! The box is simple but well made, great for odour control as well.

I had a major problem. 2 year old rescue cat. Adorable BUT MASSIVE toileting issues. Going on the tiles right beside the box. Even when pristine . Then on the rare occasions he used it he refused to bury. Unsightly given where it is plus the bathroom runs off my bedroom. The smell in my bedroom was awful and being paraplegic I had to leave it till a carer came. I was lost, it was a large box. Deep enough sides etc. So I bought a second tray , slightly different design, and so, with.limited space, massive issue, pooped right between them! Did a "litter menu" ie offered various litters at same time in different trays. Clumping, Unclumping, crystal. Perfume free. Lavender scented. Even covered tiles (where he was going with foil... he pooped beside the foil. A lot of people on all my fb cat groups asked if it was enclosed as some won't use as can trap odours. It wasn't, good size , cleaned twice daily by carers, one cat.... when all was lost I turned to exactly that, a moderna xl enclosed with charcoal filters. he was and is a hider...I bought the xl enclosed moderna and it was LOVE AT FIRST POOP. He has never gone outside it FROM DAY 1, within a couple of days he also started to bury, now an obsessive burier. Its almost a game to him. He actually uses it just to pretend bury and I think half the time he hasn't been. He goes in, does his business, spends over 5 minutes scratching and burying, pops out. Pops head and one paw back in, and flicks away again, ie double checking obsessive compulsive style. Quite hilarious. SOLVED ALL HIS BEHAVIOURS INSTANTLY. Aesthetics. I'm in a small villa but as in a wheelchair my bathroom is enormous, so that's his bathroom too.... and visitors. I love the design. The colours the overall look and shape and no more apologising when visitors come. No messes on the floor, despite obsessive digging and scattering, contains it all. I will add it does so without even a door. I wasn't sure how he would go so initially took it off. Just decided to not tempt fate so have left it off. Being in a chair I cant guide him to push the door. But even without it nil odour, nil mess, much nicer being a shared bsthroom!! I love the top section has a place for liners, filters and scoop. Though I haven't used the liners as he scratches in there in glee. sorry. Nearly done...passionate about this box. Although I'm not using the door, I chose this one as the door and therefore its opening is by far more generous in size than all others.
Thanks Moderna as I love him, he's a support/companion pet. Would have broken.my heart but was giving him back. It's extremely difficult/impossible cleaning messes in a wheelchair ! That's why I chose a 2 year old. Thought all would be fine
Dimensions are TRUE dimensions too. Some give dimensions but they are overall ie often the cat area is smaller. . Small clip attached, took 10.minutes of ocd behaviour so kept pausing. sorry blurs a little in spots as my bed.rails were in the way. You can hear the banging and over the top scratching but look at the floor after ! 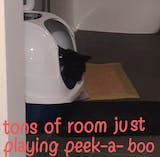 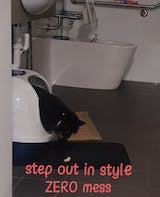 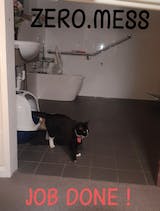 This is a great inside litter box, reduces smell and accidents over edge.

The litter box design makes it easy to clean. Delivery of my goods was extremely prompt. Very impressed with the service and the item.

Moderna Products designs and develops innovative solutions for pet accessories. A keyword at Moderna Products is "innovation" . By creating innovative products for pets, Moderna aspires to secure the well-being of your beloved pet.